We've worked with the national charity, Crimestoppers, to launch the ground-breaking new service to reduce energy crime in the UK.

The stayenergysafe service is a first of its kind and allows the public to come forward and anonymously report any suspicions or evidence of energy theft, either through the website or the dedicated number, 0800 023 2777.

We've worked with Crimestoppers throughout the project, offering a fully integrated creative service to launch the new stayenergysafe identity. We've created executions to target consumer and professional audiences, built a responsive website with its own secure portal, created a campaign launch video, a shortened launch video, implemented a multi-channel and contextual advertising campaign, and provided results based data analysis. 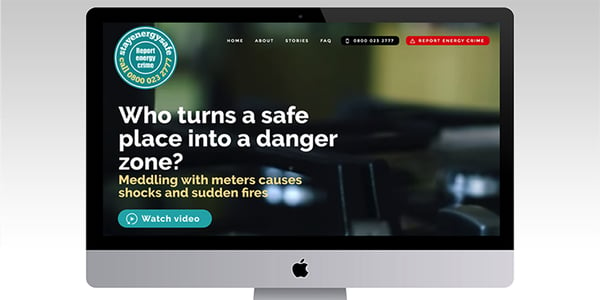 There are currently 150,000 cases of energy theft investigated every year.

The charity aims to encourage more people to report cases of energy theft, a crime which has been known to have devastating effects following fires and explosions. There are horrific stories about energy theft on the website (link).

The public launch on Monday 19th September 2016 - which highlighted the real harm to individuals, property and lives due to energy theft - gained impressive media attention with publications in The Times, The Telegraph, The Sun, and a BBC Radio 2 interview, amongst others.

The new service received over 20 new reports of energy theft through its anonymous phone line and online reporting form within the first day, and we're confident that the service will continue to encourage the public to report any concerns that they have about energy crime.

The website that we created for the campaign on energy theft can be seen at www.stayenergysafe.co.uk.

Update November 2019: we've been working hard on the plans for 2021-26.  Energy theft is a real crime, with severe consequences, and we're proud to be a part of helping raise awareness amongst vulnerable communities.

Perfecting the art of the 'not-a-newsletter'

Abseiling the Blade - my personal challenge for Naomi House